How to Train Your Dog: 4 Tips for Success 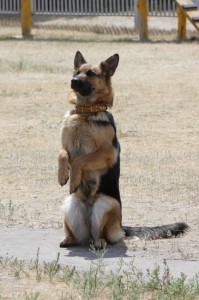 There are many dog training approaches and systems available, and learning how to train your dog can be overwhelming; however, research generally is in consensus regarding the best way to approach training your dog (or new puppy).  In this article, we will cover some of the “training basics” that should underlie all of your training efforts.  These are the basics that work, independent of what breed, how old, or how easy it is to train your dog.  The first, and most important, basic tenet is that training your dog is more successful and more quickly accomplished when you use positive reinforcement.  Now, what is positive reinforcement (an often used, but confusing term to many)?  Very simply put, when your dog does something you want him to do, you give him something that he wants in return.  That “something” includes verbal praise, affection, or treats and food.  Remember when your parents gave you an allowance when you cleaned your room and took out the garbage?  That’s positive reinforcement and it motivated you to repeat that same behavior in order to earn your reward.  For your dog, positive reinforcement is one of the best training tools you have to motivate your dog to change or learn new behaviors.  Some basics are important in order for positive reinforcement dog training to be used correctly and successfully

It’s really important that you give your dog his reward immediately after he demonstrates the desired behavior so he makes the connection between the reward and the action.  Have treats ready to hand your puppy as soon as he eliminates in the proper place.  When a behavior has been learned, more praise and fewer treats will be effective.  Using a clicker when he performs the behavior can help your dog to make the connection.

Use positive reinforcement to teach your dog to follow your commands.  Begin by giving him a reward after he demonstrates a behavior, and as he follows the new commands he is learning, require him to practice them before he is given his praise or treat.  For example, make him sit and stay while you put on his leash or give him his dinner.  Use everyday moments- anytime he wants something- to give him an opportunity to practice his new command-following behavior.

When your dog is learning a new behavior, you may need to reward him in steps as he moves toward the goal of a final behavior or trick.  This is called “shaping behavior”.  An example?  If you want your dog to roll over, and he doesn’t seem to be getting it, reward him for lying down, then for putting his legs up in the air, and eventually for rolling all the way over.

Watch carefully to see when you are giving your dog positive reinforcement.  Most dog owners tend to ignore their dog when they’re busy, until Fido’s behavior becomes annoying, then give him attention, or let him out for a walk.  If you do that, you are reinforcing the annoying behavior!  If your dog is doing things you don’t want him to do, look carefully for YOUR behavior that may be reinforcing his.